Louis really immersed himself in the life of the cabin boy and he wrote so much he thought it would be a good idea to be able to read it when he is older. So we have decided to type it in instead. Have a read and see what you think. Then leave Louis a comment.
Excellent work Louis. Ms Glaze

On a cold August morning in England in 1768 I walked with my mum to the dockside to wait for the Endeavour. I felt very anxious because I am only 12 years old and I have never been on a ship before. I also felt very sad because I was going to leave my mother behind for 18 months. When I was on the dockside I saw a huge wooden ship in front of me called the Endeavour.

On the Endeavour I saw sails as tall as the sky up like a blind. I heard chickens squawking loudly. Then I heard Captain James Cook yelling commands to the crew. I saw 94 people on the ship and Captain James Cook was holding the steering wheel. The milking goats were fighting with their long horns.

When I first got on the deck Captain Cook told me to put my uniform on. I hurriedly put on my white blouse and blue baggy breeches on and then I was ready to work on the Endeavour. I scrubbed the dustiest and dirtiest deck in the whole of England! I had fun excercising with the guns. When my clothes got ripped I had to mend them myself.

Last night when the waves were rolling I felt so seasick that I threw up in the bucket.
Posted by Ms Glaze at 4:27 PM 2 comments:

You can almost believe that Ronn was accompanying James Cook on the Endeavour. He has used lots of descriptive language. See if you can guess the word groups he has used, and what each paragraph was about. Well done Ronn! You didn't give up, even when it got really tricky.

Listen to Ava's story. You could almost believe that she is the cabin boy on the Endeavour with Captains James Cook because she speaks so fluently and expressively. Well done Ava.

Harlem has been learning how to write paragraphs. See if you can spot how many paragraphs he has written. He is pretending he is the cabin boy on the Endeavour with Captain James Cook. 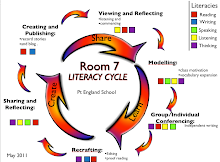